Want to upgrade from iOS 13 beta to stable iOS 12 builds? If you installed the beta version of iOS 13 or iPadOS 13 on a compatible iPhone or iPad and now want to go back to the previous version of iOS 12, you can do this using iTunes and a computer. And yes, this
Read More 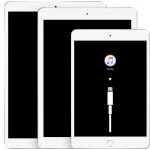 Sometimes an iPad must be put into recovery mode before it can be successfully restored or updated using a computer. For example, if the iPad gets stuck on a black screen with an Apple logo for a very long time, recovery mode can usually fix it. Normally, recovery mode is used for troubleshooting, but it
Read More