Want to try and download the ready-made Microsoft Edge web browser for Mac? You can do it right now, without waiting for the final version.

Launching and using the Microsoft Edge browser on Mac is similar to any other Mac application, since it is installed in the / Applications folder. After a little preliminary testing, despite the fact that it is a beta version of the developer, it seems to work fine and is stable enough for regular use. 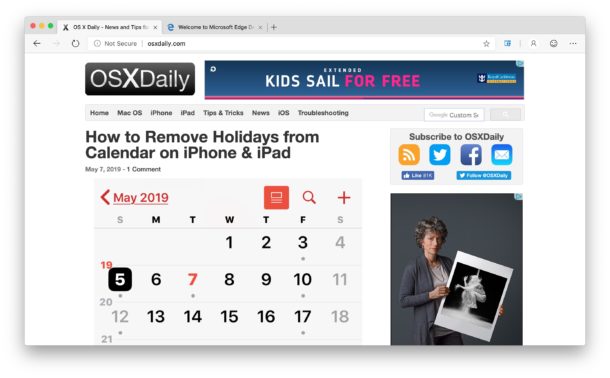 Updates for Edge assemblies will come through the browser itself, as in Google Chrome (which is again based on Chromium).

These early Edge beta versions are probably best suited for developers, but they are sure to appeal to both tinkers and Windows users with Macs.

As you may already know, Microsoft Edge is the default web browser for Windows 10 (which you have long run on Boot Camp or on a Mac virtual machine), and Microsoft Edge for iPhone and iPad is also available, so if you like the browser on one platform, you can also use it on other devices to synchronize all your data between these platforms and browsers. And, if you have just enough Edge, you can even set it as your default web browser on a Mac if you want.